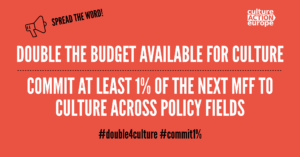 The U.K.’s departure will leave an approximate €12 billion annual gap in the EU budget that needs to be covered. Proposed is a combination of fresh money and cuts across all EU programmes, with the exception of Erasmus+ and Horizon 2020. Creative Europe, the main EU programme dedicated to culture, represents 0.14% of the EU total budget (2014-2020), out of which only one third (31%) is earmarked for culture. Given the relevance and efficacy of the programme and the need for increasing its budget, new resources should be provided independently of possible mergers with other programmes. CAE demands to double the budget available for culture in absolute terms and to ensure that at least 1% of the next MFF is allocated to culture across policy fields and funding programmes. 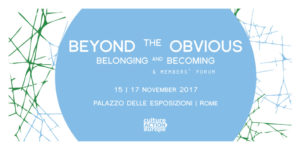 Culture Action Europe has published the report of the annual conference in Rome, 15-17 November. The report has reading and watching material, with summaries on dicussions and video clips from keynotes.

Culture Action Europe’s Reflection Paper “Belonging and Becoming: A cultural response to the White Paper on the Future of Europe and the accompanying reflection papers” proposes a first answer to this question, reflecting the voices of over 500 cultural players throughout Europe: