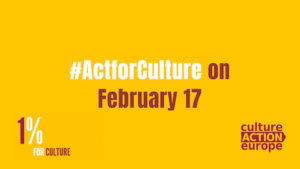 In the run-up to the special meeting of the European Council on February 20, 2020 and on the occasion of the #ActforCulture Action Day on February 17, 2020, eight cultural organizations in Germany, coordinated by the European Music Council, made an appeal to Minister of Culture Grütters, Federal Minister of Finance Scholz and Minister of State Roth from the German Federal Foreign Office. The ITI and the IGBK as members of the European Secretariat of German Culture NGOs also signed the call.

Call for an adequate budget for culture in future EU funding programs 2021-2027:

The Finnish Presidency’s proposals and the new proposal by EU Council President Charles Michel for the new multiannual financial framework of the EU 2021-2027 fundamentally lower Member States’ funds for the EU budget, but the proposal does not (yet) translate the cuts for the smaller programs, such as “Creative Europe”.

The undersigned call for a strong EU budget for culture, despite the general cuts. With a share of only 0.15% of the total EU budget, the Creative Europe program offers no real savings potential, but in return, the doubling required by the European Parliament already in 2018 can strengthen cultural participation with real European added value and can help to experience the EU as a common project.

Already in 2018, when first drafts of the new multi-annual financial framework of the EU 2021-2027 became known, the associations had made an appeal to political decision-makers, asking to double the budget of the “Creative Europe 2021-2027” program compared to the budget in the current funding period and expressing their solidarity with the Europe-wide “1% for Culture Campaign” by Culture Action Europe.