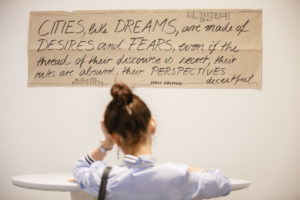 ITI is hosting On the Move‘s mobility info points – organisations mostly or partly dealing with providing free information on administrative aspects related to cultural mobility for a meeting in Berlin.

Beyond sharing experiences to strengthen the capacity of European mobility info points (expertise, service provision, communication etc.), the different representatives will interact with ENICPA members at ITI premices on 2 November afternoon and take part on 4 November in a workshop related to artists’ mobility and social protection (organised by IGBK)

The partners from performing arts and fine arts, ITI Germany and IGBK, are both non-profit culture NGOs in Germany.

ITI Germany has 170 personal members and 30 corporate members. As part of the worldwide International Theatre Institute the German centre offers a comprehensive service to the country’s theatre people in making international contacts and in preparing and organising artistic encounters in Germany and guest performances abroad and festivals in Germany.

Since more than 20 years both NGOs are cooperating in terms of European culture policy with a joint membership in Culture Action Europe (former European Forum for the Arts and Heritage). The Secretariat organized two EFAH general assemblies in Germany (Bonn and Berlin). On the national level, joint meetings with artists and politicians on questions of EU culture policy and on culture funding programmes are a part of the regular work.

Since 2011, the Secretariat developed an online information platform for touring artists in and to Germany. « Touring-artists.info» went online 2013 and is connected with a free consultancy for artists and groups provided by SmartDe. The website is constantly reviewed for changes in national and EU law and regulations and extended according to the needs of the sector and the feedback of artists.